Beer shipping is limited to select states only. If you only see a pick up option in your checkout, it is due to shipping restrictions for your address.
See shipping rules here

To implore us to always respect tradition. And yet to wash away the dead relics of its mundane path. The indelible mark of continued experimentation is tattooed on our minds. Our take on Oud Bruin has evolved over the years, but always begun as a light brown ale, fermented clean with house ale yeast and then aged in neutral red wine barrels with house bacteria and brettanomyces. But this year we took it up a notch. A careful blend of multiple vintages displays the appropriate depth of acidity and character, before being refermented with more than 1000lbs of fresh raspberries and 300# of fresh blueberries that were carbonic macerated and allowed to co-ferment on their own for several days. We apply our now-standard nouveau methodology to minimize the negative impacts of bottle conditioning to allow us to get this beer out to you just a few months after bottling. The freshness is unreal, delivering a full bouquet of mixed berry jam, blue razz airheads, and a no joke breath of raspberry kush keef. 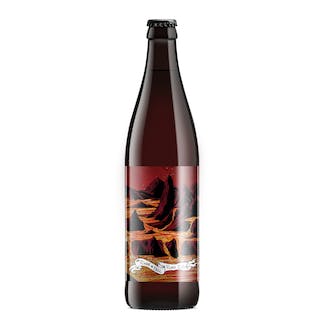 You're viewing: The River to Hell Runs Red Barrel-Aged Dark Sour Ale with Blueberries and Raspberries $17.00 USD
Add to cart
0